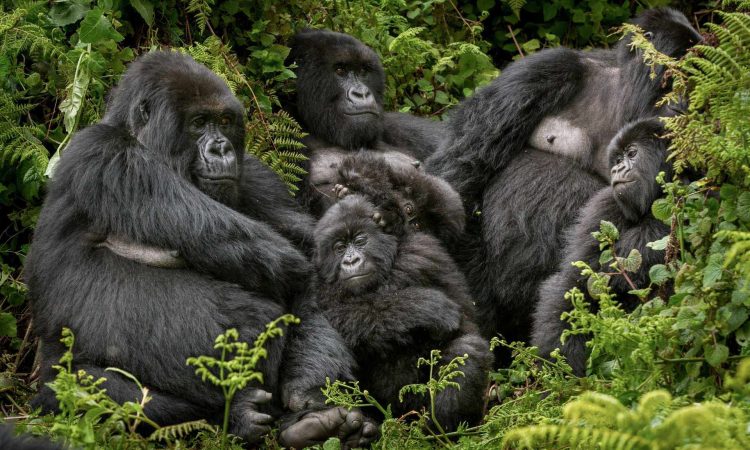 Gorilla Families in Congo are the different groups in Virunga National Park and Kahuzi Biega in which gorillas groom each other and grow. There are eight habituated gorilla families in Congo. The Democratic Republic of Congo is one of the countries in the world blessed with an abundance of untapped and virgin plant life, bird and wildlife. Virunga National Park itself is a gem worth to encounter. Though wracked by political unrest in the recent pasts, the country and more specifically the Virunga National Park is safe and tourism activities are ongoing in the park. Be reassured that you will be accorded great protection in and around the park, just make sure to book your Congo safari through a trusted and knowledgeable tour operator. Armed guards, guides and park wardens are always on the lookout for the safety of the tourists and the endangered mountain gorillas.

Gorilla trekking in Congo is relatively cheaper at only $400 as compared to Uganda’s $700 and Rwanda’s $1,500. Every single morning, tourists in groups of eight set out to visit these endangered mountain gorillas in their respective families. The eight fully habituated gorilla families in Congo that are available for trekking include;

Kabirizi gorilla family, under the leadership of Kabirizi the powerful and yet very humble dominant silverback, is found in the Bukima section just near Goma. The group was named after the director of the Congolese Institute of Conservation of Nature who died in a traffic accident. The family had first been named Ndungutse the dominant silverback that had replaced his father Zunguruka who had died of old age. Ndungutse, unfortunately, was shot dead in 1997 when he was caught in a crossfire between the government soldiers and the rebels. This led to having no head silverback to take over the leadership of the family thus the coming in of Kabirizi, a wild gorilla. He, however, faces threats of late from an ambitious silverback Masibo who undermines his leadership.

This gorilla family was named after its leader Rugendo who was killed. The family is currently under the leadership of Bukima the silverback who was originally from Buhanga. The family used to be large with about 18 members but when a split came about, Humba left with 10 members. Rugendo is highly credited for fathering great silverbacks like Humba, Mapuwe, Nyakamwe, Baseka, Lubutu, Mukunda and others that went ahead to lead most families. Rugendo family currently has nine members with 3 silverbacks, 1 blackback, 1 adult female, 2 sub adult females and 2 babies. The group is found in Mikeno sector just in between Bukima and Bikenge.

Humba gorilla family in Congo is located in Bukima and was named after Humba, the family’s lead silverback. Humba was separated from his father Rugendo in 1998 with six individuals and he is a brother to Senkwekwe who was killed in 2007 by gunmen. The family in 2014 had 16 members but due to a split, the number reduced and Humba stayed with 6 individuals while his brother Nyakamwe left with 10 individuals. Humba has since grown in number due to births and acquisitions.

Mapuwe is one of Rugendo’s offspring that he sired. Mapuwe has been on the helm of this gorilla family’s of leadership for close to 20 years that have been full of violent struggles but he has held on. The family is found in Jomba near the Uganda and Congo border of Bunagana. At the time that he left his father’s family, he had left with 2 adult females but over the years, he has gotten more members not only from the many births in the family but also through aggressive acquisitions. In 2002, Mapuwe took over all family members of Pilipili, one of the strongest silverbacks in the Virunga.

This is one of the recently habituated gorilla families that were opened for gorilla trekking in Congo in the Virunga National Park. It was habituated along with the largest family of Bageni. Nyakamwe gorilla family has eleven individuals with Nyakamwe as the lead silverback.

Located in the Bukima sector of the Virunga, the Munyaga gorilla family was first put up for habituation in 2008. The family was named Munyaga after the then family leader though currently, it is Gasore that is the leader. The group is mostly known and loved by many because of the mother of twins called Bilali and the bald-headed silverback caked Kadogo.

This is the largest gorilla family in Virunga National Park at the moment with 26 members. As is with large gorilla families, it is bound to have divisions very soon. The gorilla family is currently being led by Bageni, the dominant silverback. The group has 2 more silverbacks and they are a threat to Bageni.

In spite of the on-and-off volatility of the Congo region, the Virunga National Park staff and other conservationists are doing all they can to protect these endangered mountain gorillas of Congo and to also rehabilitate those that are hurt due to poaching, trappings laid for them by animal traffickers and so many others. The park staff, in particular, risk their lives to protect these mountain gorillas that there are more than 100 park staff that have lost their lives in this effort. It is with their combined effort that there are now 8 habituated gorilla families that tourists can visit and the numbers are surely bound to rise with the stability of the country and the Virunga National Park specifically.