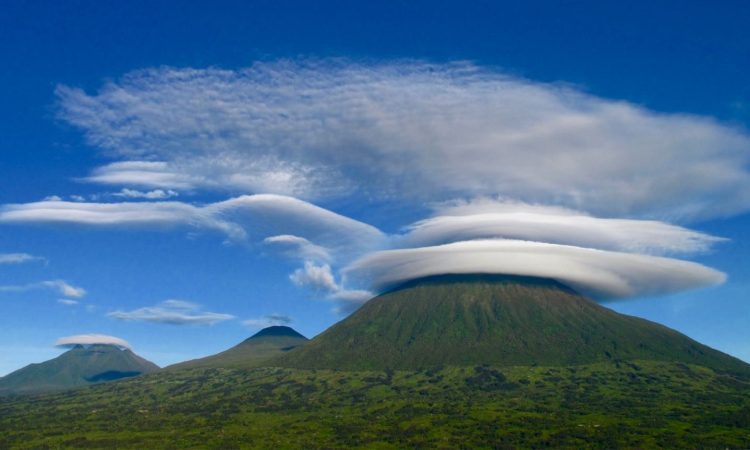 The Virunga mountains is a chain of eight mighty volcanoes that straddle the borders of the Democratic Republic of Congo, Rwanda, and Uganda. The mountain ranges are a branch of the Albertine Rift Mountains which border the western branch of the East African Rift. The term ‘Virunga’ is an English interpretation of the Kinyarwanda word ‘Ibirunga’ which means volcanoes.

The Virunga mountains has 8 volcanic ranges that are located between Lakes Edward and Kivu and two of these volcanic mountains are active. The active volcanoes of the Virunga mountains are Mount Nyiragongo which is 3,462 meters and Mount Nyamuragira which is 3,063 meters, both of which are in the Democratic Republic of the Congo. The most recent eruptions of these volcanoes was in 2006 and also January of 2010.

The highest volcano is Mount Karisimbi at 4,507 meters and Mount Sabinyo which rises 3,634 meters above sea level is the oldest of them all.

The rest of the mountains that form part of Virunga are Mount Bisoke at 3711 meters, Mount Gahinga at 3470 meters, Mount Muhabura at 4127 meters and Mount Mikeno at 4437 meters above sea level. Mount Mikeno is the second-highest after Mount Karisimbi.

These Virunga mountains have their surroundings covered with bamboo forest and mountain forest and some of them like Mount Muhabura contain crater lakes. Mount Nyiragongo, in particular, has a lava lake that is amazing to look at.

The Virunga mountains have a number of activities that can be done when visited. Some require advance preparation while others do not and some of these activities are;

Gorilla trekking in the Virunga mountains

While doing gorilla trekking in Virunga areas, you will hike though the forests and mountainous areas in search for the gorillas. The activity might be a bit strenuous depending on the location of the gorillas and it is for that very reason that the trek can be longer. Mountain gorillas seldom sleep in the same location thus causing them to move further and further away. Once you encounter the mountain gorillas, you will be allowed an hour only with them and you might choose to take pictures and videos and just enjoy their presence.

Golden monkey tracking can be done in the national parks of Mgahinga Gorilla National Park of Uganda and Rwanda’s Volcanoes National Park that are in the Virungas. This activity involves going in search for the little golden monkeys in their natural habitat. These golden monkeys live in large groups of up to 80 and they spend much of their time jumping from one tree to another playfully and in search of what to eat. Tracking them is worth it as they are not found in very many places.

The various mountains of Karisimbi, Sabinyo, Nyiragongo and the rest that were mentioned above provide a wonderful experience when hiked. All these mountains will give you wonderful views of the surrounding areas and challenges. Hiking Mount Sabinyo will give you an opportunity to be in three countries at the same time and hiking Mountain Nyiragongo will have you mesmerizing at the astonishingly amazing lava lake that continuously bubbles.

These guided nature walks are an opportunity for travelers to leisurely hike through the natural wonders of the Virunga mountains.  The numerous rivers that you will meet while on the walks, the bird species most of which are endemics, the wildlife and the wonderful vegetation cover among others all are relaxing sort of attractions and they offer a good opportunity to take postcard-like photographs that you would later share with family and friends.

The Virunga mountains are a birder’s paradise. The area has over 700 bird species and many of which are endemic to the Albertine Rift Valley. The Ruwenzori turaco, blue turaco, Miombo wren warbler among many other birds are what you will encounter, just be sure to have enough time at your disposal and carry along with your best pair of binoculars.

Other activities like cultural encounters, chimp trekking in some national parks of the Virungas and others can all be done while in the area.

The Virungas offer a traveler a lot to do but above all, they help protect the endangered mountain gorillas and other species that find the Virunga mountains home and natural habitat. Visiting the Virungas would give you an opportunity to explore these mountains and learn of their conservation abilities to their inhabitants.