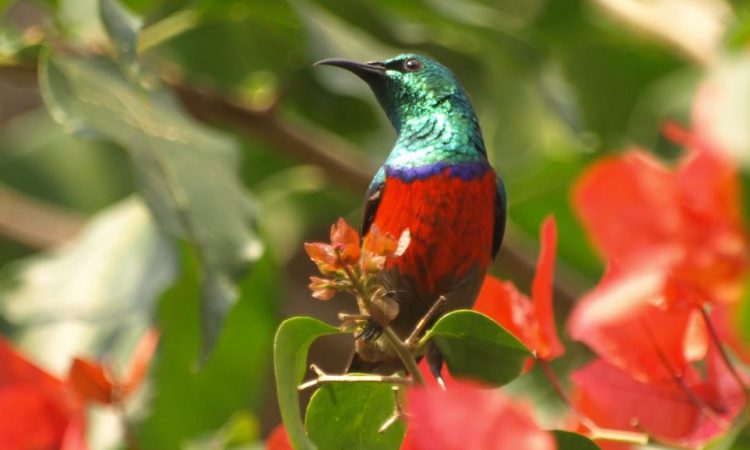 Things to do in Mgahinga gorilla national park

Things to do in Mgahinga gorilla national park

Gorilla trekking is the major activity in Mgahinga gorilla national park and it involves tourists moving on foot into the tropical rainforest in search of the endangered mountain gorillas and once found spend one hour with them in their environment. The park is a home of one habituated gorilla family Nyakagezi which is available for trekking on a daily basis. Gorilla trekking in Mgahinga National park starts early in the morning with a briefing at the Ntebeko park headquarters where after you will be allocated a park guide and start trekking in the jungle. Gorilla trekking in Mgahinga gorilla national park takes about 30 minutes to 6 hours depending on their location because they like to move from one place to another in search of food. During trekking you will be able to view other primate species in the park such as chimpanzees, l’hoest monkeys, black and white colobus monkeys, view different plant and tree species, bird species among others. Once the mountain gorillas are located you will be allowed to spend one hour with them in their natural habitat which gives you an opportunity to watch them carry out their daily activities like feeding, breastfeeding, playing, grooming young ones, learn more about their habits, behaviors, take photos and record videos.

Volcano climbing is one of the adventurous activities in the park and the park is a home of three Virunga volcanic mountains namely Mount Muhavura, Mount Sabinyo and Mount Gahinga.

Hiking mount Muhavura, mount Muhavura is the highest Virunga volcano in the park and the third highest of the eight Virunga volcanoes. Mout Muhavura rises at an elevation of 4,127 meters above the sea level and hiking takes about 8 to 10 hours to reach on top. During hiking you will pass through different vegetation zones, tough, slippery and muddy terrains and when you will the summit you will be rewarded with views of a Crater Lake, Rwenzori mountain peaks, Virunga ranges and views of Bwindi impenetrable national park.

Hiking mount Sabinyo, mount Sabinyo is the second highest volcano in the park that rises at an elevation of 3645 meters above the sea level. Hiking mount Sabiyno takes about 8 hours to reach the summit and during trekking you will pass through rugged terrain. When you reach on top you will be standing in three countries that is Uganda, Rwanda and Congo.

Hiking mount Gahinga, mount Gahinga is the smallest mountain of the three that rises at an elevation of 2, 474 meters above the sea level. Hiking mount Gahinga takes about 6 hours round trip and during trekking you will pass through thick bamboo forest. When you reach the summit you will enjoy views of a crater filled with swamp and giant lobelia.

Batwa trail experience in the park is an exciting activity which gives you an opportunity to interact with the Batwa/ pygmies who used to live in the Mgahinga forest before it was gazetted as a national park. Batwa trail experience is led by Batwa guides and it starts with a walk in the forest where they used to live, takes you through their tradition way of life, learn about their hunting skills, making fire, collecting honey, fruit gathering, visit Garama caves which used to act as a meeting point, hiding place and food store, enjoy traditional entertainments from Batwa women among others.

Mgahinga gorilla national park can be visited all year round though the best period is during the dry season also known as the peak season in the months of June to September and December to February. During the dry season there is less rainfall in the park therefore access roads, hiking and gorilla trekking trails will be dry and passable.

The park can also be visited during the wet season also known as the low season in the months of March to May and November because that’s the best period for bird watching where bird lovers will be able to view migratory bird species from Europe.

How to get to Mgahinga gorilla national park

The park is located in southwestern part of Uganda and can be accessed by road transport means whereby you will drive from Kampala or Entebbe via Masaka, Mbarara, Kabale, Kisoro and then to the park headquarters which takes about 9 to 10 hours’ drive.

The national park can also be accessed from Kigali Rwanda whereby you will fly to Kigali international airport and then connect to the park via Cyanika border which takes about 3 to 4 hours’ drive.

The park can as well be accessed by air transport means whereby you will book scheduled or charter flights from Entebbe international airport or Kajjansi airfield to Kisoro airstrip and then connect to the park headquarters by road.